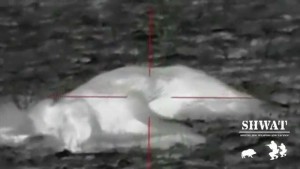 Hog hunting grows in popularity. Yet it seems to make very little difference to the astounding expansion of the feral hog population. Gun manufacturers started designing hog specific rifles and hog specific ammunition. However, the wide geographic area in which hogs are hunted, doesn’t allow for one specific gun to do the job. Hogs in the California foothills require a different rifle as opposed to the hogs in Florida’s swamps. Hunters usually use the same rifle used in deer hunting, for example a Winchester Model 94. However, the modernization of hog hunting in specific made for suppressors, night vision scopes, and tactical edge added to the guns.

It would be close to impossible to list every adequate cartridge, ammo type and guns and rifles to kill hogs. Listed below are some of the typical weapons and cartridges, which are adequate in killing boar. Should you not find it here simply use it as reference and look for cartridges with similar ballistics. Choosing a caliber with too much recoil will make accurate shooting difficult especially for hunters with little experience. Any shotgun, handgun, or rifle, which have enough power to stop a 200-pound animal in its tracks, will kill hogs. You might reason that a hog is not as large as many other wild, but the difference lies in a wild boar’s toughness.

~ The Winchester Model 94 has a smokeless .30-30 chambering and set the standard for lever action rifles and although a popular deer hunting rifle excellent for hog hunting. Its killing ability is 150 yards and less and suitable in jungle-like countryside.

~ The Winchester Model 70 with .30-06 cartridge is a favorite bolt-action hunting rifle for hogs. After this rifle’s introduction in the 1930s, the design alterations made during 1964 easily takes down hogs at ranges well beyond 200 yards. Hunters share the same opinion that lighter 150-grain bullets are effective, but recommend round nose 220-grain bullets to cut through thicker brush.

~ Marlin Model 1895 using a .444 bullet is the rifle hunters recommend when living in areas like northern Florida. Smaller projectiles easily deflect in the branches and twigs. The larger bullet pushes its way through branches and twigs with enough power to stop a large wild hog in its tracks.

~ Smith & Wesson Performance Center M&P15 Rifle with the .223/5.56mm cartridge is contrary to believe not too small for hog hunting. An excellent tactical rifle can take down large boars over 200 pounds successfully. With great balance, it features a two-stage, 4.5-pound trigger, A2 buttstock and 20-inch stainless barrel. It is extremely accurate even at distances of 300 yards.

~ Wilson Combat SBR Tactical in 6.8 SPC has a suppressor and 11.3-inch barrel with no recoil, making it ideal for beginner hunters, youngsters and women who are recoil sensitive. Hunters report that they have taken down hogs weighing over 300-pounds using Night Optics D740 NV scope while using Barnes 95gr TTSX.

~ Hog Hunter from manufacturer Savage that boasts a 20-inch-barrel bolt action with threaded barrel and rifle sights. It is available in .223, .308, and .338 Winchester with all three cartridges potent to kill large boar. Buy the 223 ammo online in bulk. You can also get any other ammo needed for your specific rifle, handgun, or shotgun online.

~ .280 Remington, which is a hand loader’s dream and great all-round hunting round effectively killing even huge wild hogs.

~ The .35 Remington has great terminal ballistics. Ensuring it is capable to take down large-bodied black bears thus recommended for hog hunting.

~ The Smith & Wesson .500 is a maxed-out cartridge killing anything that walks, crawls, or flies with capability of shooting five quick shots. The recoil of this heavyweight is more manageable when hunters use heavy long-barreled handguns for immediate killing shots.

~ .233 Remington is popular for shooting predators and varmint with mild recoil and suitable for various firearms with excellent accuracy. Accurate up to 300-yards this ammunition are also used in firearms, which are chambered for 5.56 mm cartridges.

A factor new hog hunters must take into consideration to stop a wild boar immediately is the perfect shot. They could take off running even after a good shot. It’s easy to lose track of it completely in dense bush. The perfect shot requires breaking the shoulder or spine. However, even then, it might continue running up to fifty yards further.