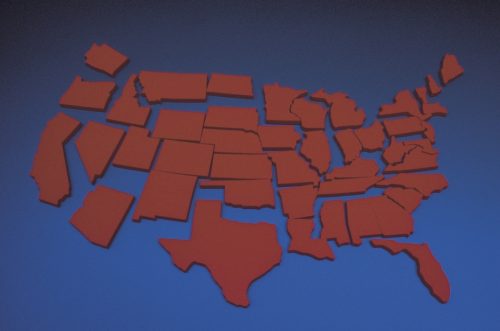 Whether you have a concealed carry permit or you’re thinking of buying a gun for the first time, understanding the concealed carry laws from state to state will ensure that you have a smooth process of obtaining your firearm and staying legal with it. Everyone has a different opinion on the second amendment and in fact, more than 50% of people think gun laws should be more strict.

The goal of this article is to help you understand concealed carry laws so you know where you stand in your state.

What is Concealed Carry?

Concealed carry means you have the ability to legally carry a concealed firearm in public. A concealed firearm means that it is hidden and not visible to everyone around you. In order to be concealed, the firearm needs to be hidden under clothing or carried in a backpack or purse by the individual carrying it.

Concealed carry laws require that firearms can be transported in a vehicle by the individual and under their control. It needs to be available to the person carrying it and can be stored under the seat or in the glove compartment.

Constitutional carry means that an individual can carry without a permit, background check, or safety training. It can also be referred to as permitless carry. Concealed carry often requires all of these things for many different reasons.

While concealed carry laws (and gun laws in general) might be strict in some states, you can’t let that get in the way of your individual liberties. The same applies to your prepping plans whether it be survival fishing, homesteading, or stockpiling. As an American, you have the right to bear arms. However, it is important to remember your state’s concealed carry laws.

Some states even have the option to openly carry. Open carry means that a person is legally allowed to carry their firearm in a holster or it can be attached to a sling. This makes it open which is visibly noticeable, and easily accessible. Within the past few years, more states are making it legal to openly carry.

The reason that many citizens are in favor of open carry is that criminals tend to hide their weapons, but those who abide by the law can openly carry them and should not be forced to hide them. There are a few different ways to openly carry depending on your state.

The first is permissive open carry. This means that you can legally carry a firearm either on foot or in your vehicle openly. There are five states that prohibit open carry – California, District of Columbia, Florida, Illinois, New York, and South Carolina. Alabama, Missouri, North Dakota, Pennsylvania, Virginia, and Washington restrict open carry. If your state restricts open carry, this means that you generally are allowed to open carry, but you need to follow your state’s restrictions.

There are other states that are licensed open carry states. This means that you are only allowed to openly carry a handgun if you have a permit. States with this law include Connecticut, Georgia, Hawaii, Indiana, Iowa, and Maryland, Massachusetts, Minnesota, New Jersey, Oklahoma, Rhode Island, Tennessee, Texas, and Utah. In Massachusetts, Minnesota, and New Jersey, it is illegal to openly carry long guns.

The remaining states allow open carry in public without a license or permit. Even if you are able to openly carry, it is important to remember that firearms are still not allowed in certain locations, like schools, churches, state-owned buildings, public transportation, or any places where alcohol is sold.

May Issue to Residents Only

This means that your state may issue a concealed carry permit based on their judgment after you have met all requirements and finished your application. This is specifically for residents only. California and Delaware are the only two states that may issue to residents only.

May Issue to Residents and Non-Residents

Shall Issue to Residents Only

If you complete your application and meet all requirements, then your state will issue you a concealed carry permit. Alabama, Colorado, Georgia, Louisiana, Michigan, and Nebraska are all of the states that shall issue to residents only.

Shall Issue to Residents and Non-Residents

If you meet all requirements and complete your application, your state will issue you a concealed carry permit. The states that shall issue to residents and non-residents are Washington DC, Florida, Illinois, Indiana, Iowa, Minnesota, Nevada, New Mexico, North Carolina, Ohio, Oregon, Pennsylvania, Rhode Island, South Carolina, Virginia, Washington, and Wisconsin.

Constitutional Carry to Residents Only

You are allowed to carry concealed firearms with no permit if you are a resident. Nevertheless, if you are a resident of your state and meet all application requirements, your state will issue you a permit. States that allow residents constitutional carry are as follows: Alaska, Oklahoma, South Dakota, Tennessee, Texas, West Virginia, and Wyoming.

Constitutional Carry to Residents and Non-Residents

Constitutional Carry and Does Not Issue Permits

Vermont is the only state that does not allow constitutional carry and will not issue a permit. However, Vermont does allow concealed carry.

The two states with the strictest concealed carry laws are California and Delaware. California has the seventh-lowest death by gun rate in the U.S. and Delaware has the eleventh lowest death by gun rate. While the death rate may be low due to the strict laws, it’s still not the lowest, and most second amendment backers would say this is a violation of constitutional rights.

Other states that also deal with strict gun laws are Illinois, Connecticut, New Jersey, New York, Hawaii, Maryland, and Massachusetts. Before you are allowed to purchase a gun, most of these states require background checks, training, and even have a waiting period.

Out of all of these states, Massachusetts and New Jersey have the lowest gun ownership rate (14.7 percent) in The United States.

There are quite a few states that are friendly with your second amendment right to gun ownership. States in the south and in the midwest seem to be the main states with gun-friendly laws.

Arizona, Idaho, Texas, Arkansas, New Hampshire, Georgia, Alabama, Mississippi, Missouri, and South Carolina are the main states with the loosest concealed carry laws. The Firearms Industry and Trade Report is used to examine the economic output of guns in each state and determine which states have the loosest concealed carry laws. The more guns are owned in each state, the more gun-friendly that state is.

Concealed carry laws are a highly debatable topic but for the foreseeable future, we don’t expect much change. The states with high respect for the second amendment will likely retain loose restrictions and more blue states will continue to make you jump through hoops to own a concealed firearm. Nonetheless, the laws are the laws, and understanding them will help keep you out of trouble.